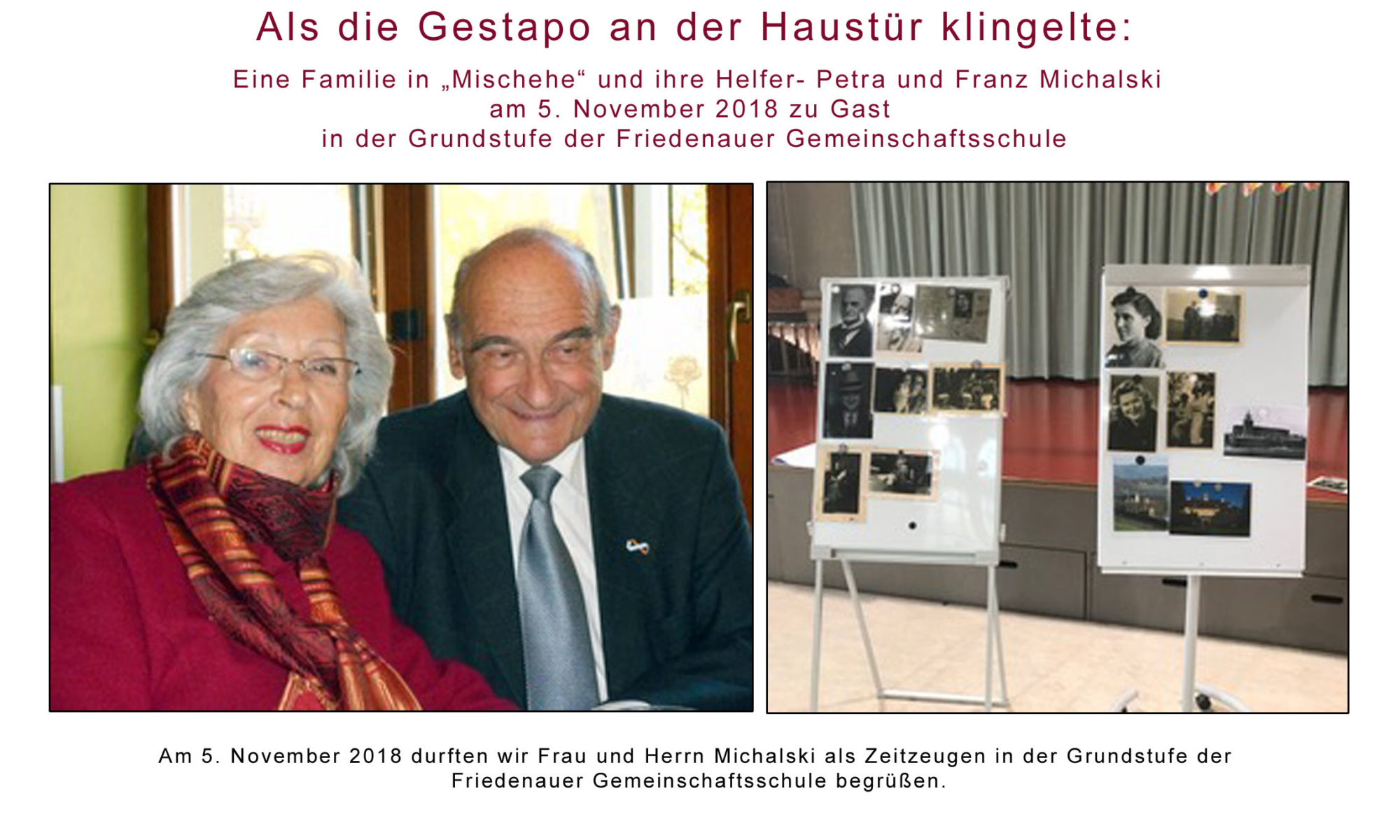 Through the initiative of the AG Begabungsförderung, Mrs. Michalski and Mr. Michalski were invited as contemporary witnesses to the elementary level of the Friedenauer Gemeinschaftsschule on November 5, 2018. The 80 seats in the auditorium quickly filled up with pupils from the elementary and secondary school levels who had come accompanied by their teachers, parents and teachers.

It became quiet and the seven-year-old Joona B. opened the event with the words: “We welcome Petra and Franz Michalski. They are the grandparents of the boy who was insulted and attacked for months because of his Jewish faith at the secondary level of our school.”He then reported on how the pupils had dealt with the subject of anti-Semitism and the role of the “silent heroes” up to now.

The next ninety minutes were about the silent heroes and their actions. Mrs. Michalski stood up and began to talk about her husband’s memories from the National Socialist era. Franz Michalski, who was the son of a Jewish mother and a Catholic father, documented them in his work: “When the Gestapo rang the front doorbell: A family in a mixed marriage and those who helped them [1].”

Through the powerful depictions and the pictures hanging on boards in the auditorium, on which the family members, relevant places and individual heroes of their survival story were depicted, Petra and Franz Michalski made it clear to the students to what extent anti-Jewish policies and the associated restrictions imposed on Jews in the population continued to intensify and to what extent the deeply shocking experiences from that period continue to have an impact on those affected to this very day.

At the end of the event Franz Michalski read the names of his silent heroes: Alfons Thienelt, the policeman; Erna Scharf; Gerda Mez; Marquis de Respaldizza; the hoteliers, Horst Schneider and Mr. Hetschel. Franz Michalski and his closest family members owe their lives to these people. In Yad Vashem they were honored as “righteous among the nations”: Gerda Mez, Erna Raack and their parents Ida and Ernst Scharf. Unfortunately, the other helpers could no longer be located at the time of the tribute.

“We, Petra and Franz Michalski, would like to stress that even in the worst times it was possible to help people in need if you had courage, wisdom and charity. We hope that today’s youth will recognize and observe the signs of the times and will promptly protest against any form of injustice.”

We feel greatly honored and grateful that Mrs. Michalski and Mr. Michalski will speak again on January 21, 2019 as contemporary witnesses for the students of the Friedenau Gemeinschaftsschule.