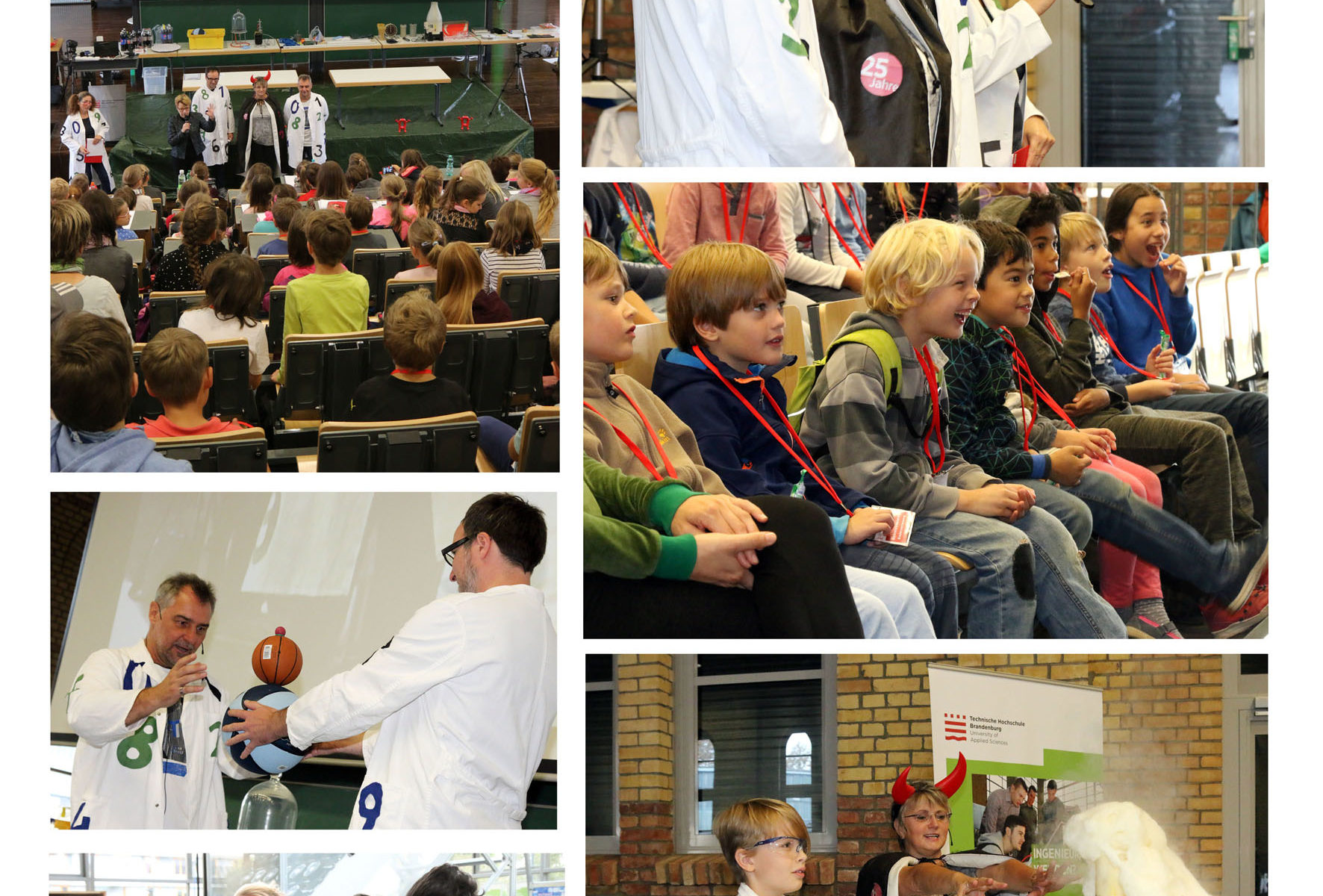 Under the motto “Above the Clouds”, the Brandenburg University of Applied Science (TH Brandenburg) opened its doors again this year on September 20, 2018 and invited students to take part in an experimental lecture.

Accompanied by their parents and with the active support of our educator Janina, 22 children from the Friedenauer Gemeinschaftsschule made their way to Brandenburg an der Havel, Magdeburger Straße 50, in the early morning with plenty of sunshine and not a cloud in the sky. The university students directly supported the course of the event after our arrival at 8:30 a.m. with a program organized especially for the children. They were also available to us during the day as a contact person and escorted the children to the workshops.

All seats in the lecture hall were occupied when Ms. Steinicke promptly asked the attendees to congratulate a student who had their birthday by singing the song “Happy Birthday” at 9:00. The room became quiet once more and the president of TH Brandenburg, Professor Wieneke-Toutaoui, appeared in front of the audience.

In addition to the thematic introduction, Professor Wieneke-Toutaoui explained to the children how important it is to question facts, to “not believe everything that is said” and encouraged them to check out various books from libraries. The ability to critically question circumstances and to understand learning as a process of constant reflection or as a task of one’s own positions is vital for scientific work.

With his introductory lecture on the history of flying, Dr. Sturm was not the only one who captivated the audience. The audience was also amazed when Professor Flassig and the scientific staff let the homemade hot-air balloon float through the hall and nitrogen fogged the screen on which our camera child projected the event.

In the workshops that followed, our children had the opportunity to dive into virtual worlds in three different scenarios with different tasks, to discuss the basics of programming games and to get to know the structure of the hardware.

After a guided tour through the machine hall, a video sequence explained to the students how the fuel cell works. Afterwards, those interested in building fuel cell cars developed their own ideas for maintaining the cars’ drive using the materials provided, such as installing a second fuel cell or generating energy using solar cells. In an additional workshop, another group of our students were able to demonstrate their basic knowledge on models in order to boost their performance.

This is not the first time that we have been given the opportunity to visit the Kinder-Uni of the Brandenburg University of Applied Sciences. We were already on site as guests in September 2017 and enjoyed an extensive offer. However, it is not only the attractive campus and high-quality program that make us happy to return to TH Brandenburg. The individual and friendly support in connection with the organization of this event is by no means a given nowadays.

Visiting extracurricular learning venues and taking part in scientifically guided workshops extends beyond familiar forms of standard teaching. Due to the link between theory and practice, the curricular connection and not only within the framework of talent promotion, offers an opportunity to make it clear to children that knowledge and skills acquired at school are of considerable importance to our society.  The Friedenauer Gemeinschaftsschule would like to thank the Brandenburg University of Applied Scienes for this eventful and exciting program; we are looking forward to further visits in the future. My special thanks go out to Janina and the parents who accompanied us for their support.