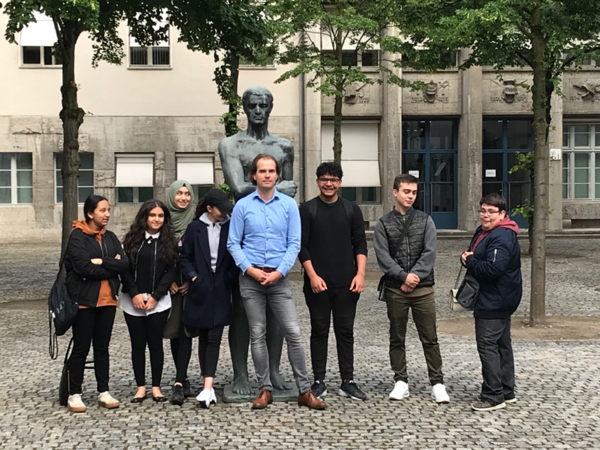 In honor of the 74th anniversary of the Sinti and Roma resistance in the concentration and extermination camp Auschwitz-Birkenau on May 16, 1944, a commemoration ceremony took place at the German Resistance Memorial Center on Stauffenbergstraße 13-14 in 10785 Berlin.

In their introductory speeches, the deputy director of the German Resistance Memorial Center, Christine Müller-Botsch PhD , and a project staff member of the German Sinti and Roma Cultural Center, Tobias von Borcke, pointed out that so far there has been too little focus placed on the resistance of Sinti and Roma in the current educational curriculum regarding National Socialism. When Petra Rosenberg, the daughter of Otto Rosenberg and chairwoman of the regional association of German Sinti and Roma Berlin-Brandenburg appeared, the audience in Hall 2 A fell silent. Petra Rosenberg talked about her father Otto Rosenberg, who was the only one of 11 brothers and sisters to survive the Sinti and Roma genocide. She was only able to talk about this horror 50 years after the event to the guests, who were made up of Holocaust survivors, members of the association as well as students of the Friedenauer Gemeinschaftsschule.

Her father shared his memories in the contemporary witness document “Das Brennglas”, which was published in 1998. Petra Rosenberg repeatedly described the atrocities he had to endure and spoke about the crimes against humanity that were committed. After the reading, the pupils of the Friedenauer Gemeinschaftsschule were taken through the memorial by the lecturer and research assistant, Ms. Sieg. They were encouraged to reflect on the history of National Socialism so that they could deepen their knowledge in the following workshop, which introduced educational materials on the Sinti and Roma resistance against National Socialism, some of which remains unpublished.

At the memorial, in addition to the work of Otto Rosenberg, they also learned about the life of boxer Johann Trollmann, who used his last boxing match as a political statement, entering the ring with “lightened hair and white-powdered skin” to publicly denounce Nazi racial politics. Extracts from the biography of Walter Stanoski Winter, who was involved with his brother in planning and staging the Sinti and Roma uprising on May 16, 1944, were also discussed.

In keeping with the motto of equal participation, the students were able to pose their questions to the lecturer as well as make critical comments. For example, one criticism they had was that most of the materials did not include women’s biographies. The lecturer said this still needed to be done in the documents, to which little research has been devoted so far. The timely publication of educational materials on the Sinti and Roma resistance under National Socialism is a very valuable and long overdue contribution aimed at raising awareness of the resistance of this persecuted group.